Time after planting is a commonly used index for determining when to harvest cassava. Roots are typically sufficiently well-developed beginning 6 to 7 months after planting. Harvest maturity is based on the root size desired by the market. Harvest may be delayed until market, processing, or weather conditions are favorable. However, as the roots age beyond a year, they become woody and fibrous.

Several randomly selected plants, representative of the entire field, should be harvested beginning 6 months after planting to determine the average root size.
Foliage senescence and lower leaf yellowing can also be used as an indication of harvest maturity. When the lower foliage is distinctly yellow and some leaves have dried up, it is likely the plants are mature enough for the roots to be harvested.

Harvest Methods
Harvesting cassava roots is usually done by hand and is easier when the soil is moist. Harvesting is also easier if planting is on ridges or in beds and in loose or sandy soils, rather than on flat ground and in clay or heavy soils. To facilitate
lifting of the roots out of the ground, the main stem of the plant is usually cut back to a height of 30 cm to 50 cm (12 in to 20 in). The stem is used as a handle to lift the roots out of the ground. In light soils, the roots are slowly drawn from the soil by pulling the stems or with the help of a kind of crowbar. In heavier soils or during the dry season, harvesting usually requires digging around the roots to free them prior to lifting the plant. While lifting, care should be taken not to break the roots or split the skin. Wounded tissue is an entry point for decay causing micro-organisms.

During the dry season, the upper parts of the cassava plant should be removed several weeks prior to harvest. Removing the vegetative growth will lengthen the shelf life by several weeks. This may be attributed to partial root curing and skin thickening while still in the soil.

After the roots have been pulled out of the ground, they are removed from the base of the plant by hand. Care must be taken during the harvesting process to minimize damage to the roots.

Mechanical damage incurred by the roots during harvest will result in higher amounts of postharvest moisture loss and secondary decay. Cassava roots usually start rotting from the neck, which is the point of attachment of
the root to the mother plant.

Harvesting the roots with a short section of the stem still attached may prevent spread of decay into the root. Cassava should be graded in the field and any unmarketable, damaged, or diseased tubers should be discarded. Damaged roots are highly susceptible to decay, particularly if the postharvest curing is inadequate. Loosely adhering soil should be removed from the root surface at the time of harvest.

Cotton or soft fabric gloves work well to facilitate field cleaning of the roots. The cassava should be gently placed in strong well ventilated field containers for transport out of the field. Wooden crates or strong plastic containers are much better field containers than sacks or reed baskets, which can cause significant root skinning during transport (Figure 18). The roots should be taken to a shaded area prior to loading on a vehicle for transport out of the field. When locally made containers have sharp edges or rough inner surfaces, an inner liner made from fiberboard or foam can be used to protect the
roots from abrasions during handling. 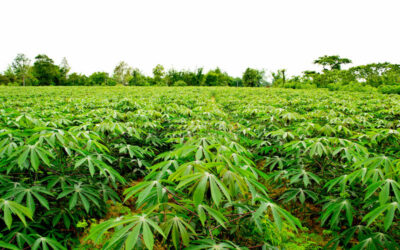 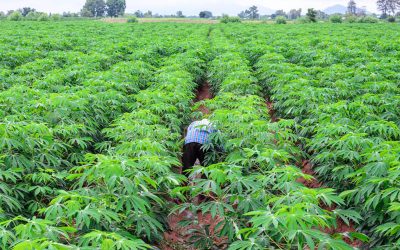 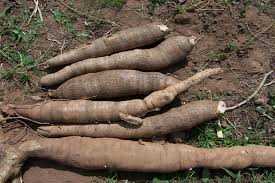