Ugandan farmers are faced with the pest and disease burden affecting most banana species grown in the country, ranging from the East African highland banana commonly known as matooke, sukari ndizi, bogoya and gonja. The pests considered “most dangerous” by crop scientists are weevils and nematodes.

The banana weevils, known as Cosmopolites sordidus, are found in all banana growing countries and have existed from the time farmers began growing bananas. They lay eggs at the stems and cause the trunks to rot leading to collapse of the plant.

According to Dr David Talengera, a banana breeder at the National Agricultural Research Laboratories Institute (NARLI) in Kawanda, the weevils destroy the core of the banana stem from the neighbouring infested suckers.

This causes water deficiency in the plant causing stunted growth leading to a 30 to 50 per cent yield loss in most farmers’ fields.

The banana nematodes are a type of roundworm, which inhibit the root system of the crop causing inability to absorb water and reduce the leaves of the plant leading to 50 per cent yield loss.

However the nematode species are very difficult to distinguish; some are parasitic while others are not. 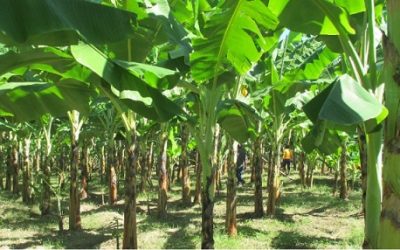 Controlling Pests and weeds on your plantation

How to manage your Banana plantation

Why Banana Plants Get Droopy Leaves.